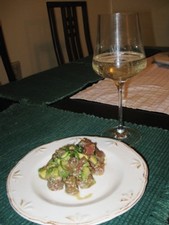 ♦ Pair this with a sweeter wine, such as our Dolcino Gewürztraminer or Simpatica to off-set the heat of the pepper.

Poke (pronounced POH-kay) is served in most Hawaiian homes and restaurants as a side dish, and no gathering in Hawaii would be complete without a few bowls of poke. In Hawaiian, poke means "cut piece" or "small piece." Poke is bite-size pieces of raw fish doused in seasonings. Poke is actually the Hawaiian version of the elegant Japanese sashimi (a combining of the Hawaiian and Japanese taste for raw fish). The fish for poke is sometimes even lightly seared or fried.

For centuries, Hawaiian fishermen cut their catch of raw fish into cubes and seasoned it with whatever ingredients they had. Modern versions make use of seasonings brought by the many different cultures of the Islands, such as soy sauce, onions, tomatoes, and chilies. Poke is so common in the Hawaiian culture, that you can stop at a local grocery store and choose from several freshly made varieties.

Mention regional foods to Hawaiians, and people think of poke. It is considered a local food or "local grind" - comfort food to the Hawaiians. Normally local food is not the cuisine that is served in upscale hotels and restaurants of Hawaii, but poke has crossed such boundaries. Poke is still evolving in the Hawaiian Islands. It was not until the 1970s that the recipes for poke started appearing in cookbooks. History From www.whatscookinginamerica.com