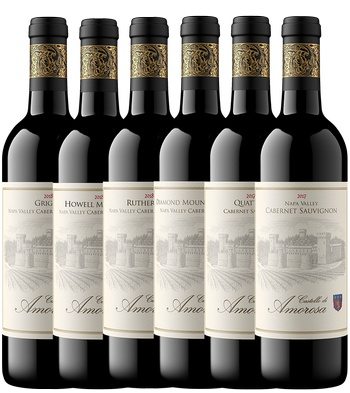 ♦ One bottle of 2017 Cabernet Sauvignon, Napa Valley, awarded 91 Points by James Suckling "Ripe, rich and powerful with tons of blackberry, cassis and pomegranate aromas, but also some nice, moderately dry tannins and enough blood orange freshness to lift the imposing body at the finish of this well grafted Napa Cabernet. Drink or hold." Named a Double Gold Medal in The San Francisco Chronicle Wine Competition.

♦ One bottle of 2017 Quattro, Cabernet Sauvignon, Napa Valley, a blend of Cabernet Sauvignon fruit from four top vineyards all co-fermented in a single tank, this powerfully-structured, limited production Napa Valley Cabernet was a result of our winemaking team's quick thinking, and a tribute to the record 2017 harvest season.

♦ One bottle of 2018 Grigsby Vineyard, Cabernet Sauvignon, Napa Valley, this limited-release Cabernet was grown in the Yountville AVA. This single-vineyard cab benefited from the AVA’s rocky, well-drained soils and a long growing season that allowed the fruit time to develop unique flavor characteristics. A complex and full-bodied wine with classic notes of black cherries, warm plums and ground herbs.

♦ One bottle of 2018 Howell Mountain, Cabernet Sauvignon, Napa Valley, with elevations of 1,400 to 2,200 feet, Howell Mountain Cabernets are some of the most concentrated wines in the world. The shallow volcanic soils results in the vines struggle to stay alive, thus resulting in small clusters of tiny grapes. The smaller grapes have a higher skin-to-juice ratio resulting in deeper-colored wine with higher tannin. Which results in more complex tannis, adding unique flavors.

1 Review(s)
*Cabernet Only*
In Stock

I received the sampler for Christmas and it was delicious. The 2017 Quattro was full bodied with notes of black currant and on the dry side. The 2017 Diamond Mountain District was like , like a chianti. The 2016 Napa Valley Cab was similar to a favorite of mine which is the 2015 Napa Valley Cab. The 2018 Howel Mountainb Cab is my new favorite. Full Bodied and smooth.