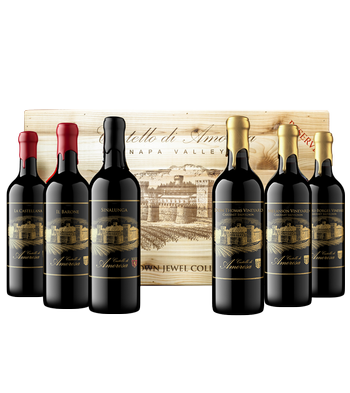 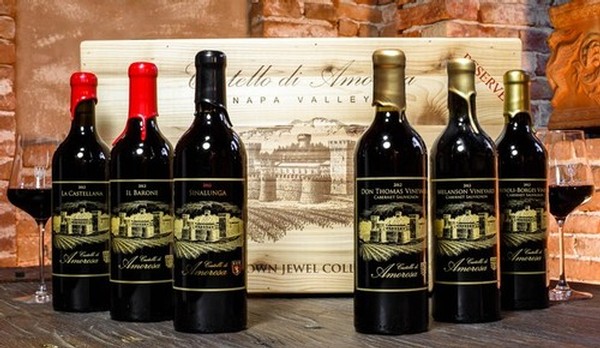 "A selection of the estate’s finest lots, the 2012 Cabernet Sauvignon Il Barone’s texture and richness are outstanding. A dense ruby/purple color is followed by abundant notes of blackcurrants, licorice, graphite and a hint of new saddle leather. Full-bodied with soft tannins as well as a long, authoritative style"

"The 2012 Proprietary Red Blend La Castellana is composed of 76% Cabernet Sauvignon, 15% Sangiovese and 9% Merlot. In central Italy, a wine such as this would be called a Super Tuscan. This outstanding offering reveals background oak, hints of new saddle leather, blackcurrants, cherries, licorice and underbrush, a medium to full-bodied mouthfeel, supple tannins, good acidity and a generous mouthfeel. The result is a wine that begs for a grilled Florentine steak."

"​Deceptively medium in body, the 2012 Cabernet Sauvignon Don Thomas Vineyard packs a serious punch. The flavors are dark and bold to the core, with plenty of black fruit, smoke, iron and spices woven throughout. A long, persistent finish rounds things out nicely. This expressive Cabernet Sauvignon should drink well for the next decade or so."

"A big, explosive wine, the 2012 Cabernet Sauvignon Morisoli Borges hits the palate with a rush of dark red and blue fruits, smoke, incense, violets, lavender, orange peel and spices. The firm tannins are going to need time to settle down, so readers should not be in a rush. This is without question the most complex and pedigreed of Castello di Amorosa's Cabernet Sauvignons."

"From a vineyard atop Pritchard Hill, this wine delivers big, bold flavors and structure. Integrated tannins form around flavors of cloves, baking spices and dried herbs. Blackberry and black cherry pop in between a flinty, earthy side."

Sinalunga is a Super Tuscan blend epitomizing the love, passion, quality, attention to detail, and dedication that went into the making of Castello di Amorosa. Named for the small Tuscan commune near Siena which inspired Dario Sattui to construct the Castello, this exceptional, limited-production wine is symbolic of the castle itself, a crowning achievement. A blend of 95% Cabernet Sauvignon and 5% Sangiovese sourced primarily from hillside vineyards in the Ruthorford viticultural area of Napa Valley, an area famous for producing layered and complex Cabernet Sauvignon, this balanced and opulent wine presents notes of tobacco, leather, and classic “Rutherford dust” with structured tannins and a silky, lingering finish.

"2012 will be a vintage to remember. Near perfect weather conditions resulted in a rare combination of high quality fruit and an abundant crop load. Thanks to dry conditions through winter and spring, the 2012 growing season started off with an earlier than typical spring bud break, bringing it forward by an average of one week. A mild and sunny spring resulted in steady flowering and even fruit-set, allowing the vines to set yields as much as 20% more grapes per cluster compared to previous vintages. The summer months brought a lengthy stretch of warm days and cool and often foggy nights, with veraison taking place in early July, a full two weeks earlier than 2011. The cool period at the end of September, followed by unusually warm weather in the beginning of October, allowed for the development of a harmonious balance of acids and sugars, and high polyphenol content in reds. The majority of fruit was picked at ideal ripeness prior to the arrival of rain in late October, making coordination of the avalanche of grapes arriving in the winery one of the greatest challenges of the harvest. 2012 promises to be truly exceptional; with wines of well-structured tannins, rich concentration, and developed aromatics defining the vintage."
Brooks Painter, Director of Winemaking

Be the first to review this item
*Sold Out*