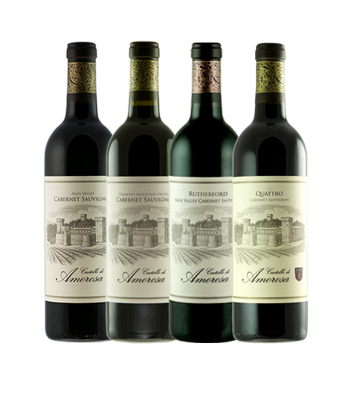 Critics and wine lovers agree that 2016 is simply an incredible vintage for Napa Cabernets. Robert Parker’s Wine Advocate, published October 29, 2018, noted extreme excitement about the quality of the 2016 vintage in Napa Valley, stating that 2016 is “the best, most consistent Napa Valley vintage among a string of five great years: 2012-2016."

Cannot be combined with other discounts.

♦ One bottle of 2016 Quattro, Cabernet Sauvignon a blend of Cabernet Sauvignon fruit from four top vineyards all co-fermented in a single tank, this powerfully-structured, limited production Napa Valley Cabernet was a result of our winemaking team's quick thinking, and a tribute to the record 2016 harvest season. Regular $85.00 Sale $68.00

♦ One bottle of 2016 Rutherford, Cabernet Sauvignon perhaps the most well known growing region in the Napa Valley. Known for it's elusive Rutherford "dust", made up of a unique top soil that gives the crop a rich flavor, that is hard to duplicate. This elegant Limited-Edition Napa Valley Cabernet Sauvignon displays hints of black cherry, savory spices and hints of minerals. It displays traits of a classic earthy tone, a characteristic that is common among Cabernet Sauvignon made in the Rutherford region. Excellent now but can age well for over a decade. Regular $85.00 Sale $68.00