2013 has been an incredible year for the vineyards of the Napa Valley, with the Napa Valley Vintners calling this year's growing season "early, even, and excellent." The 31 acres we have planted around the Castello with Sangiovese, Merlot, Primitivo, and Cabernet Sauvignon developed beautifully over the course of the year, and we loved tracking the beauty each season brought to the vines. Now that another record year in the valley is coming to a close and the vineyards again lay dormant, we're looking back on the fruits of this year's labors. Here are a few of our favorite vinyeard photos from this past year:

The Cabernet Sauvignon vineyards above the Castello, pruned back to allow healthy new buds to begin forming

Bud break arrived at the Castello in early April, and the vineyards quickly brightened with springtime colors

The warm, dry spring we had throughout the valley allowed for earlier bud break and perfect conditions for flowering

June saw the arrival of berries on the vines.

The vines saw a bit of rain in a summer shower

The warm summer months allowed for an even ripening of the berries. Here a cool glass of Charonnday rests among the Primitivo vines.

The end of August saw verasion in the vineyards, as the berries began to ripen and change color.

Primitivo vines and berries in front of the Castello

Cheers to the end of another fantastic year in the Napa Valley! We're looking forward to 2014!

A 'Season To Taste'

I am a cooking and food magazine junkie. It all started with my Mom and a ritual that took place during our visit to the ‘beauty parlor’ (not a salon, but the beauty parlor!) for Mom’s weekly scheduled shampoo and set. Here she regularly scoured through the latest edition of ‘Family Circle’, ‘Good Housekeeping’ and ‘Sunset’ magazines and recited recipes in a much too loud voice so I (and everyone in a 20 yard radius) could hear her over the constant noise generated by the mission control-like dryer chair. I would nod with dutiful approval dotted with an intermittent ‘yep, sounds good’ which were typically enough to satiate her. To add to her enjoyment and proof I really was listening, I even managed to insert a question or two; “what is braising?” or “why does it have to be sifted?” This launched her into an explanation that today seems worthy of ‘Food Network’. However, one particular phrase seemed to arise on nearly every recipe and always required definition and clarification — “season to taste”.

Mom explained the following:
Add salt until it you taste it. If it seems bland- it probably is. Increase by a ¼ tsp. and taste after each addition.
Add seasoning and spices (pepper, fresh herbs, dried seasoning) until the taste is in balance with the rest of the flavors. Make sure spices and seasonings cook along with the dish. However, additional fresh herbs added at the end can make a big difference.
Add acid (Tabasco, lemon juice, or vinegar) if it tastes flat or one-dimensional. Hot sauce works in creamy dishes because the acid from the vinegar and the heat from the peppers boost the flavors. Keep a light hand; if the dish isn't supposed to be "spicy hot" add just a splash of hot sauce then use vinegar or lemon juice.
Add sugar; the tried and true fix if you overdo it. Sugar balances both salty and bitter flavors. Adding a touch of sugar makes too salty taste less salty and too bitter or sour taste less bitter without actually decreasing the amount of salt or acid in the recipe.

The thing is, Mom’s beauty shop narrations were not idle or forgotten ideas of an affordable casserole or a quick and easy dessert, they  were her inspiration for future meals and goodies that made it to the family table and eventually led to my life-long pursuit of ‘tasting’.

Here is one of my cold-weather favorites. It is hearty, spicy, savory and comforting; ideal to keep in the fridge and warm up after a day of visiting with friends and family or after hours of wrapping followed by seconds of unwrapping. Remember always adjust the spices as you progress and as in all recipes—season to taste!

I wish you perfectly seasoned greetings--

Brown ground meat and/or sausage. Add to a large pot with all other ingredients. Cook over medium low heat until vegetables are to desired softness. To accelerate the cooking process, give the veggies a quick sauté before adding to the pot. Stir and taste often and, as always, add seasoning as needed. 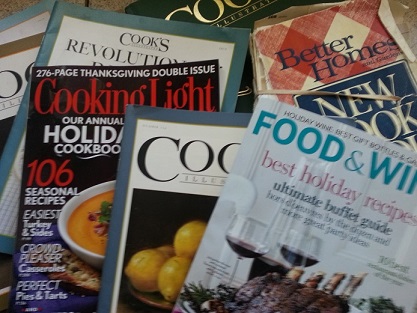 My current library. The Better Homes and Garden cook book was a wedding gift from who else; my Mom. Held together by a rubber band, for 24 years I have referred to this book filled with hand written notes and recipes.

‘Deconstructed’ is contemporary food lingo but Mom would have just said this was quicker and easier than making and cooking meatballs! This is tasty and easy to reheat during the upcoming week of merriment or freeze leftovers in containers for up to 6 months.

Dry, crisp and almost exotic; Castello di Amorosa’s Anderson Valley Gewurztraminer balances the spice and works with the richness of the ground meat and sausage. Perfect for a first course or as a hearty meal served with fresh bread or warm tortillas.

If you have been lucky enough to explore our Grand Barrel Room on a tour and tasting recently at the Castello, you may have noticed a few new additions to the stunning 12,000 square foot room. Right next to where our guests have the chance to taste wine straight from the barrel, there sit several large, concrete, egg-shaped containers. These are fermentation tanks, and they are used to ferment a special selection of the Castello’s award-winning wines.

Concrete? You might ask. What can concrete do for wine? Well as it turns out, concrete is a fantastic alternative to oak or stainless steel in winemaking. Without the “oaky” impact on a wine from barrel aging, the concrete allows the wine to retain its fruity characteristics and the inherent characteristics of the grapes are allowed to shine, making it an especially useful fermentation method for showcasing the terroir of single vineyard wines.

Concrete eggs are an interesting mix of ancient and ultra-modern winemaking techniques, since the first wines were actually fermented in pottery jars called amphorae. The egg shape is a newer modification, which allows the wines inside to have a natural convection current as the carbon dioxide released during fermentation helps to naturally stir the wine and mix in the sediment, or lees.

We originally had two concrete eggs in our Grand Barrel Room, and focused on several single vineyard wines, including our Ferrington Vineyard Dry Gewürztraminer and Tyla’s Point Pinot Bianco. These aromatic varietals work especially well with this fermentation method, because the concrete enhances the floral aromas and even increases the mineral characteristics in these wines. The elegant complexity of these wines from their fermentation in the eggs has led to them both winning high praise from tasting panels and our guests.

This past year we have also produced a limited amount of Chardonnay, called “La Rocca” or “the fortress.” Our Winemaker, Peter Velleno, explains that “the reason for the Chardonnay is that the use of concrete (or more specifically the lack of oak barrels) allows the flavor of the vineyard to be the star. Chardonnay needs to have a rich mouthfeel, so it makes sense to try it in concrete, where there will be no oak flavors or aroma, but still the benefits of aging on the lees.” Aging wine on the lees, or the yeast and sediment that settles to the bottom of the barrel during fermentation, imparts a creaminess and complexity that can’t be found in stainless steel. This year we are excited to be fermenting some of the Chardonnay fruit from the Bien Nacido vineyard in one of our eggs.

So keep an eye out the next time you visit the Castello, and if you take a tour down into the Grand Barrel Room you’ll be able to check out this unique fermentation technique that helps to make our Italian-style wines even more incredible!

Raise a Glass! How Will You Celebrate 80 Years of Repeal?

The turn of the twentieth century was indeed a dark (and dry) time in American history. Organizations like The Women’s Christian Temperance Union, which promoted Prohibition, believed alcohol to be the cause of most social ills. On January 16th, 1919, Congress passed the 18th Amendment, outlawing alcohol thereby putting an end to drunkenness, crime, mental illness, and poverty.  (Ahem!)

Ironically, during Prohibition, America's thirst increased. Organized crime rose to replace formerly legal methods of alcohol production and distribution. Ultimately, respect for the law diminished and drunkenness, crime and resentment of the federal government prevailed. Over the course of the next thirteen years, support for Prohibition waned as the nation awoke to the widespread problems Prohibition caused. The number of repeal organizations increased, and in 1932 Franklin D. Roosevelt ran for President on a platform that included the repeal of Prohibition. He won that race and on December 5th, 1933, Pennsylvania and Utah, the final states needed for a three quarters majority, ratified the 21st Amendment, repealing Prohibition and restoring our right to a celebratory drink. The 18th amendment remains the only amendment to our Constitution to ever be repealed.

On December 5th we celebrate Repeal because it marks a return to the rich traditions and enjoyment of alcohol as a sacred and protected social custom. Conveniently located between Thanksgiving and Christmas, Repeal presents the perfect occasion to gather with friends and celebrate! Unlike St. Patrick's Day or Halloween Repeal is a day we can all share in observing; it's written in our Constitution.There are no outfits to buy, costumes to rent, or gifts to wrap. Simply celebrate the day by sharing a glass of wine with a loved one.

Section 1. After one year from the ratification of this article the manufacture, sale, or transportation of intoxicating liquors within, the importation thereof into, or the exportation thereof from the United States and all territory subject to the jurisdiction thereof for beverage purposes is hereby prohibited.

Section 2. The Congress and the several States shall have concurrent power to enforce this article by appropriate legislation.

Section 3. This article shall be inoperative unless it shall have been ratified as an amendment to the Constitution by the legislatures of the several States, as provided in the Constitution, within seven years from the date of the submission hereof to the States by the Congress.

Section 1. The eighteenth article of amendment to the Constitution of the United States is hereby repealed.

The suggested pairing for your celebration! 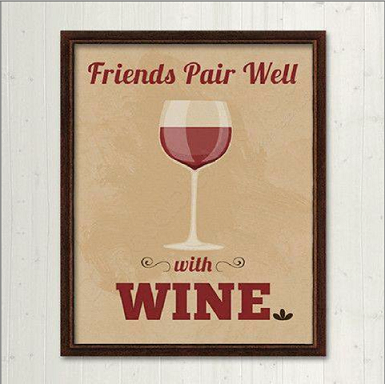